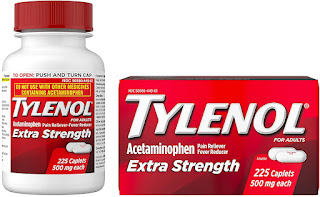 In 1982 a series of deadly poisonings occurred in the Chicago Area and the unlikely method was common over-the-counter painkiller — Tylenol laced with cyanide.

The frightening thing about the murders was that it never solved and that the killer may very well walk these streets to this day. The murders also inspired a host of copycats including Black Widow Stella Nickell. Stella drew inspiration from the murders and developed an ingenious way (in her mind) to off her burdensome husband and make it look like a Tylenol psycho spiking common consumer products.

It is also a case that can draw similarities with the Anthrax murders which coincided with the September 11th attacks in 2001. The Anthrax attacks took 5 victims and were never solved and both cases involved a perverse intent to cause harm but without the direct face-to-face confrontation, you typically think of with serial killers. Such methods of distance murdering seem to create obstacles for detectives and law enforcement. There are no two ways about it, this isn’t just murder but domestic terrorism.

Imagine the prospect of killing somebody from many miles away just by sending a letter or tampering with a packet in a drug store and the police have absolutely no trace as to who you are? It is truly frightening.

The below picture depicts the removal of all capsules after further reports of tampering in 1986 (credit to Roger Ressmeyer/Corbis).

On the same day 27 year old Adam Janus of Arlington Heights died in hospital later that same day following by his brother 25 year old Stanley and sister-in-law Theresa who was 19.

Soon after more victims followed including Mary McFarland (31), Paula Prince (35) and Mary Reiner (27). They were all from the Chicago and Illinois area.

The police soon linked every death to the ingestion of Tylenol and a warning was issued to the public via the media. The testing carried out revealed that cyanide was present in the bottles and it seemed apparent they were tampered with in store. Very possibly purchased, spiked and then put back on the shelves.

What initially baffled the police was that the pills taken by the victims all came from different production plants and sold in different stores around the area. They did not link the poisoning to the manufacturers and it became clear that the products were tampered with on the store shelves. Following on from this incident there were more than 270 different incidents of tampering across the USA after the initial Tylenol deaths, inspiring a host of copycats.

One opportunistic tax consultant called James Lewis decided to blackmail Tylenol for $1 million to “stop the killings”. Lewis was a strange individual with a murder charge being dropped in 1978 as a result of an illegal police search in Lewis’ home. Despite receiving 12 years in prison for extortion; there was never enough to convict Lewis for the Tylenol murders…. And it seemed unlikely it was Lewis. Lewis was just a vulture trying to feast off of the tragedy.

It emerged that Lewis was in New York at the time of the initial murders. DNA tests and samples submitted to the FBI in 2010 did not bear any fruit.

One method to try to lure the killer out of hiding was to publish the location of the grave for 12 year old victim Mary Kellerman. The FBI Analyst John Douglas (yes of the TV series Mindhunter fame) speculated that the perp would visit the gravesite. Despite 24 hour surveillance the killer was not found at the grave of Kellerman.

Roger Arnold was suspected and investigated by police. This would lead to a spiral of events where Arnold suffered a nervous breakdown as a result of the investigation and decided to murder bar owner Marty Sinclair in retaliation for the police tip-offs. Arnold would then murder the wrong man and kill John Stanisha and be sentenced to 30 years in prison for this case of murderous mistaken identity. However; as far as the Tylenol case goes Arnold was cleared and there is no direct link to suggest he did it.

The UNABOMBER Ted Kazynski was considered a suspect and the FBI carried out DNA tests in 2011. Ted’s Unabomber crimes were horrific and it is clearly obvious why they would suspect him of the Tylenol killings. However; despite his parents having a home in Chicago, there really isn’t much else to go on… They’re both sick bastards and perhaps that’s about it?

And finally, Laurie Dann. Laurie went on a killing spree in 1988 in Winnetka, Illinois. With many psychological ailments before her breakdown Dann was researching poisons such as arsenic and would mail poisoned snacks to acquaintances and perceived enemies before her fatal shooting spree on May 20th 1988. This was six years after the Tylenol cases and seemed to be the breaking point for Dann. During 1982 Dann was married to Insurance broker Russell Dann and living in the Chicago area; however the police cannot directly link Dann to the killings. Perhaps the Tylenol slayings was just a warm up before her full meltdown. Although it may just be speculation as both cases involve poisoning (albeit different poisons) within the Chicago areas.

Investigations appear to be ongoing since 2010 despite the length of time and in my opinion, lack of concrete suspects. The case was a major PR win for Johnson & Johnson resulting in how they effectively dealt with the crisis — including changing packaging, recalling products, and offering refunds to anybody that purchased Tylenol around that time. Interestingly enough the case is now studied as an example of flawless crisis management and is used for educational purposes.

An interesting theory I found out on Reddit linked the case to a spate of Coca Cola poisoned murders in Tokyo Japan. This is an extremely interesting theory as 3 people in Japan fell victim to cyanide poisoned Cola in 1977; however it seems to be more of a grisly coincidence as opposed to a geopolitical conspiracy.

One person that drew inspiration from the case was Nickell who poisoned her husband using lethal cyanide and rival-brand Excedrin tablets. This resulted in the death of her husband Bruce Nickell but to make the deaths seem like another case of product tampering similar to the Tylenol murders; Nickell also poisoned a random capsule bottle and killed Sue Snow an Auburn bank manager. Nickell’s skewed logic was that the FBI would be investigating another Tylenol-like case and the heat would never be on Stella. In truth building, the evidence against Nickell was a struggle for the police. She is now serving a life sentence for the murders and product tampering.

This took place in the US state of Washington in the late 80s.

Psychologists described the killer as so strange that their normal guidelines do not work. Not only did the killer have…

I am a mystery/true crime writer predominantly. However, I am a student of the world! A “writer” in self-training anyway… I hope you like my posts.